Has anyone seen the movie Paris Je T’aime? Do you remember that vignette with Margo Martindale? She takes a solo trip to Paris, and gives a great monologue about falling in love with the city, and the city falling in love with her? Don’t laugh, but I had that exact feeling when I went to Los Angeles. I’ve been to quite a few places, but I must say, I didn’t feel as home as I did in L.A. I wasn’t sure how I would feel because so many people have told me negative things about it.  Well, I do live in San Diego, and people are in San Diego for a reason. No, Los Angeles wasn’t perfect but I had this amazing feeling that I could not describe, like Hey- I can see myself living here! I loved waking up to the palm tree-lined streets and a view of Downtown in the distance. I loved all the different areas (except for tourist-ridden Hollywood). I enjoyed seeing all the hustle and bustle going on.

It really does bother me to be away from the city. It does. Every day I think about when I finally will be able to make Los Angeles my permanent home, which will hopefully be in the next couple of months. I’m so close, yet so far!

I’ve seen many movies in my life, and I’ve always noticed that Los Angeles is often a setting. IN some films it plays a crime-ridden cesspool. In others it’s a glamorous haven for teens. In many, many films- it focuses on show business and plays toxic, vapid desert. Other times, it plays something entirely different. Below I compiled a list of some of my favorite movies set in Los Angeles, there are many I’ve seen, and many more I intend to see. These are not a “best” list, it’s just a list of some that have resonated with me.

Dope (2015)- This movie was really refreshing when I first saw it. It’s a great Los Angeles-centered film for the millennial generation. It focuses on a trio of “geeks” from Inglewood who get into a world of trouble when Malcolm accidentally acquires some drugs and ammunition from one of the local drug dealers. Malcolm meets with a businessman named Austin Jacoby- who has a connection to Harvard, and the drugs. Blackmailed into selling the drugs, the trio comes up with a clever way to get rid of the supply via bitcoin transactions on the dark web. In the end, Malcolm and the trio plant a trail back to Jacoby, and Malcolm blackmails in return for Harvard admission.

Crash (2004)-  Centered around car culture in the city, Crash follows individuals of different ethnicities, beliefs, and economic backgrounds, and is the story of how ignorance and prejudices can cause avoidable conflicts.  With an all star cast of actors such as Sandra Bullock, Brendan Fraiser, Matt Dillon, Terrance Howard, Thandie Newton, and many more this film won the controversial Academy Award for Best Picture in 2005.The setting for Crash makes plenty of sense since Los Angeles is one of the most diverse cities in the country, and is where economic and racial inequality is at its worst. In today’s racially tense atmosphere, Crash is more relevant than ever.

Friday (1995)- While films like Boyz N’ the Hood, South Central, and Menace II Society provided a sad commentary about low-income Black communities in Los Angeles, Friday has fun with them. Craig has just lost his job, and spends his time throughout the film sitting around, hanging out with his friend Smokey. Not much happens in this film, as it takes place during an entire day, and mainly focuses on the main characters’ and neighborhood shenanigans. The film is mainly just another day in the neighborHood in South Central.

Set it Off (1996)- Another film revolving around the urban Black community, Set it Off is centered around four females all wronged by the system in some way. Stony loses her brother to police brutality, Frankie is fired for presumed connection to a robbery and acting accordingly in a life or death situation, T.T. loses her son for an accident out of her control, and Cleo is just part of the negative “hood” mentality. There is no happy ending to this film and Los Angeles is just an unjust and corrupt cesspool.

Training Day (2001)- The greatness in this film is the authenticity of the environments. The creators of this film went deep into actual gang territory, featuring the the Imperial Courts neighborhood, as well as locations in Hoover Block and Baldwin Village. This film also won the Oscar for Denzel Washington in his portrayal of rogue cop Detective Alonzo Harris. The events in Training Day occur over the course of 24 hours and gives its audience a whirlwind ride through the crime-ridden, corrupt side of Los Angeles.

Real Women Have Curves (2002)- Ana is a Hispanic teen from East Los Angeles who commutes to a high school in Beverly Hills, and works in her sister’s garment factory during the summer. Los Angeles in this film doesn’t seem like major city, but more of a cage for protagonist Ana. This is a very unglamourous, neutral view of the city in comparison to many other Los Angeles films. At the conclusion of the film, Ana has been accepted into Columbia University and moves to New York City. What I love the most about this film is the female empowerment presented throughout.

We Are Your Friends (2015)- This film focuses on EDM, but the film features Los Angeles as an amazing backdrop and displays some of Zac Efron’s finer acting moments from the past couple of years. The San Fernando Valley is of particular focus in this film. In We Are Your Friends, visuals are more of priority than substance with beautiful night shots of Downtown Los Angeles, and wide shots of the Valley. The best part of this film was the party atmosphere combined with the catchy dance tracks.

Greenberg (2010)- Greenberg is a quirky movie about a man who temporarily moves to Los Angeles while his brother is away in Vietnam. Having recently suffered from a nervous breakdown, Roger is looking to lay low for a while. Being a New Yorker, Roger doesn’t drive, which is seen as an anomaly in Los Angeles. During his time in the city, Roger develops an unconventional relationship with his brother’s assistant Florence, and tries to reconnect and understand his past.

Thirteen (2003)- Thirteen focuses on the toxicity of negative peer influence and is slightly based on the events in actress Nikki Reed’s life. Some of my favorite scenes were shown in Venice Beach and there are some additional scenes on Melrose Avenue. Thirteen capitalizes on the loss of innocence and wanting to belong by giving viewers a peek into the dark world of teenagers. Large cities like Los Angeles tend to provide many temptations to its young, impressionable residents. I remember my mother forced me to watch this film shortly before I entered middle school as a cautionary tale.

Clueless (1995)- Clueless is one of the essential 90’s teen movies, and is based primarily in glamorous Beverly Hills. Out of all the movies on this list, Clueless is the most upbeat and is like a modern fairytale. Los Angeles/Beverly Hills is this rich kids’ paradise where everyone seems to be fashionable and there’s a happy ending for everyone. Also side note: does anyone notice how many teen films in the 90’s and early 2000’s were based in Southern California? 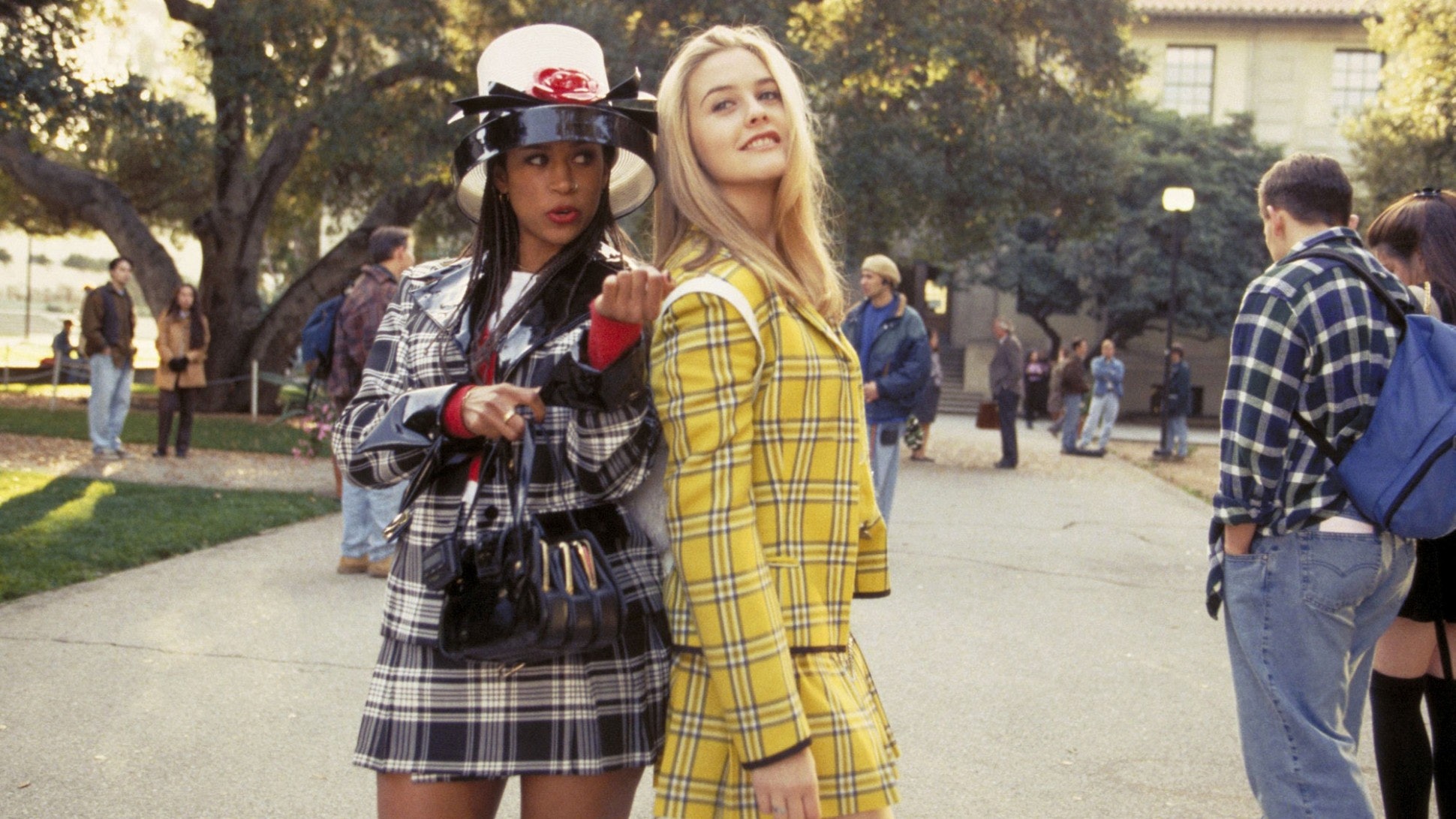 The Neon Demon (2016)- The most recent entry on my list, this film focuses on the dark side of the fashion industry.  Los Angeles is captured beautifully here, but it is a magical and vapid wasteland. With the exception of maybe one, all the characters are awful and have no redeeming qualities- even the main character Jesse is transformed by the toxic environment. The Neon Demon shows the metaphorical (and possibly literal) desperation of those willing to be on top, and the fact that few have IT- and many don’t.

Entourage (2015)- I kind of fought with myself over this film, but I enjoyed it. The Entourage movie follows up on the events from the conclusion of the wildly popular HBO series. The great thing about Entourage is it all about show business and brings a light-hearted comedic side to the insanity of the industry. In my opinion, Entourage is to Los Angeles is what Sex and the City is to New York. It’s an escape from reality that glorifies excess, sex, and success. It’s not meant to be realistic- is it?

Beyond the Lights (2014)- The antithesis of the above-mentioned film, Beyond the Lights tells us that what you often see in the entertainment industry is an illusion, and that many singers (in particularly females) are not the way they are by choice. This film brings some well needed humanity to celebrity and sheds light on depression. Unlike a lot of other show business films, this movie has a happy ending. Instead of becoming a victim of the fast life, Noni turns her life around and becomes the artist she was meant to be.

Nowhere (1997)- Perhaps a more fitting homage to Brett Easton-Ellis’s Less Than Zero, Nowhere is a psychedelic and painfully 90’s view of L.A. teens. The movie boasts appearances from many of the darlings from that time period (Rachel True, Rose McGowan, Ryan Phillipe, Heather Graham, Denise Richards, Mena Suvari, and many others). The film features drug, sex, mindless conversations, and even alien abduction. The film doesn’t make a lot of sense, but then again life doesn’t make a lot of sense.

Adriana is from North Carolina, but is now based in Southern California. She is a fashion school defector turned writer. She has also worked in the underground festival space, and has a passion for uplifting female filmmakers. View all posts by Adriana Gomez-Weston

3 thoughts on “My Relationship With L.A. & Some Favorite Films Set in the City”